Of course, the cats on your world can't talk. Getting back into MOTU a bit. ►

◄ Project Zebra: Proud of machines that think, suspicious of people who try to

I semi-regularly pick up a few e-books here and there when they're on offer, or are electronic-only releases, and then forget about them existing in an online account somewhere. For instance, I put From Bayou to Abyss: Examining John Constantine, Hellblazer on one side in the first half of last year despite it being the sort of book that's perfect to dip into for five minutes. Physical books are easier to keep track of.

I've used Kindle for PC with PlayOnLinux before now, but didn't have much joy with CrossOver and didn't really want to create a new bottle solely for one app or do the same with a throwaway VM… so the other quick way to get the book files is to link a Kindle (I went for the cheapest working Kindle 4 I could find buy-it-now on eBay, £17.50 including postage) and then use the Manage Your Content and Devices page to "Download & transfer by USB". In Chrome, you currently have to allow what the browser refers to as "insecure content" for the downloads to not fail silently (possibly the files are served over http from an https site?) You can then drop them into Calibre with the Apprentice plugins, having added your device serial to the plugin config, and get them into file formats to use on other devices, such as with FBReader on Android, or the various old Kobo and Sony e-readers I've got. To wipe a Kindle 4 but leave the serial number connected to your account, disable wifi, then go to Settings and press menu again for the factory reset option.

Since Amazon has convinced / strong-armed the music industry into allowing downloadable MP3s it's an ongoing source of somewhat quizzical side glances that books and audio books require hoop jumps to use unencumbered. The hoops are pointless – it only takes one person to be able to remove DRM for the content to be out – and just inconvenience paying customers. Then again, the company is subsidising e-readers and tablets to encourage media sales, and doesn't have a market lead on MP3 players. 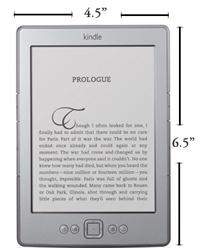 Mini-review: I quite like the Kindle. It's in acceptable used condition. The screen, like all 6" e-ink screens, is cramped and the contrast of the Pearl era tech is so-so. Unless you're okay with a very limited viewing area (and you can reduce margins and line spacing) you'll probably feel the need to use it in landscape for width, and then you realise the other half of the text you'd see if you were reading a book is missing (plus, annoyingly, you can't use the five way controller to turn pages, it's set to skip chapters). It wouldn't be enhanced by a backlight, I've tried a Paperwhite, but it's light and as a PADD contains no other distractions, it's just something to put a fiction book on (one at a time being my preference) and immerse with. But if you're used to using a tablet, or even a Kindle 3, held portrait it feels more like a device for a child and you end up balancing it at your fingertips to use the navigation buttons on the edges. From an end user perspective it would make sense to stick two of the 6" screens together, even if that meant fractional delay and refresh sync issues, and I could cope with the top refreshing slightly before the bottom. Instead the market's been given over to other devices and no progress made with e-ink for the average consumer (i.e. person buying one for less than a reasonable quality 8" or larger tablet on Amazon). The Onyx Boox line exists, ditto the Kobo Forma, and Amazon offer the Kindle Oasis which is slightly larger than its usual offerings, but none of these retail at a carry-around-and-break price comparable to, say, the Samsung Tab A8 I got last year.

Apparently this is due to the e-ink company (they're chasing signage dollars rather than personal devices, and as mentioned Amazon subsidises basic Kindles) as well as manufacturing economies of scale, so the situation may improve a lot when patents expire this decade: https://news.ycombinator.com/item?id=22827833

The K4 is currently running 4.1.4 of the OS, so I considered throwing Duokan or KOReader (alternative interfaces) onto it so see if can set keys up as I want them. Duokan doesn't require jailbreaking, but has other issues and KOReader is more convoluted to set up, with its own caveats. I'm not sure it's worth it versus just finding the best compromise settings on what will always be a compromised device.

Interesting tangent: artificial constraints are also the reason why digital cameras were nobbled to prevent them being used for film production (not that that the maximum 30 minute continuous recording time stopped a lot of amateur producers). The ending of a tax on video cameras is apparently what let manufacturers release firmware upgrades to bypass the restriction when webcam shortages were inconveniencing people working from home.