◄ Dusting off some Kindle books, aka this should be easier than it is

Did I ever get out of it, when with Transformers I've been absentmindedly collecting for years? A couple of times. As a kid I sold all of the MOTU figures I had to one newspaper ad contact, including the annuals and most of the comics IIRC. There was a 200X revival which was fun, but secondary characters were badly short packed by Mattel with countless He-Man and Skeletor variants cluttering up stores (or done only as exclusives) and I got more back than I paid for them and put it towards driving lessons without regrets. MOTU is something I have good memories of but didn't hold interest in the same way as TFs.

I did collect quite a few of the Classics figures that started being aimed at adult collectors in 2008, mainly the Snakemen vs Powers of Grayskull and Evil Horde vs the Rebellion. Not in a completist way, and I've since picked up a few 200X Masters / Evil Warriors again to go with them because they're easy to get now and often more interesting sculpts than the equivalent Classics -- the 200X line was also designed by Four Horsemen Studios and as good as any high-end collectibles but with action features, and MOTU is fundamentally a daft, brightly coloured "power fantasy" toy universe for kids aspiring to be muscly barbarians wearing furry underpants (He-Man has a massive gay following) or do magic, or invent stuff, or keep snakes. I was also in the right place at the right time to pick up an 80s Grayskull front someone had custom painted to go with them.

(And I've subsequently picked up a small number of Funko Pops -- a convention exclusive Clawful was in Tesco, due to 2020 meaning there weren't any conventions, and they've done ones of characters I remember fondly like Tung Lashor, Webstor and Mosquitor. I should probably have skipped the Evil Lyn even though it was on clearance because human faces look terrible in that style). 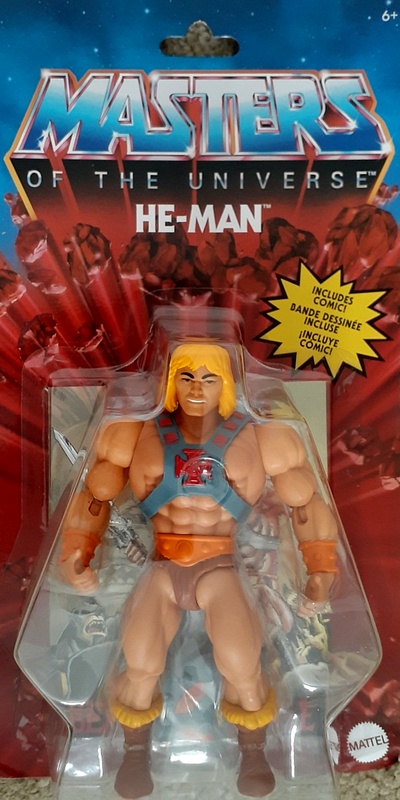 But the old ones hit the nostalgia button more, and with Origins now around there's a bit of excitement there. It's a shame the non-US multilingual packaging doesn't have descriptive text (Heroic "Secret Identity" of He-Man! Evil Ghost of Skeletor!) and if memory serves the blame for this lies in part with Quebec (and possibly other territories) legislating against packaging that lacks translations of all text. But mostly it's Mattel for sending multilingual carded stuff to English-speaking countries, and you see similar shitty distribution issues with Hasbro dividing the world into the US, Asia, and everywhere else. If this seems a petty thing to complain about, bear in mind that bios/descriptions and artwork are part of the appeal and flesh characters out for kids enough that some of them will be talking about them decades later -- it's worth paying some attention to detail if making toys.

So far it's been Adam (loose from someone parting out the Sky Sled set), Cringer (got the Battle Cat, partly to use the harness on an original), a couple of Scare Glows (one to leave on card, one to jazz up with repro original parts) and a Teela (after having tried and failed to order one for someone else, the seller allegedly sent the first and allegedly will resend but look at the other negative reviews -- if it turns up it can go to one of the mayor's charities for kids). Plus a Super7 Evil Lyn because the yellow of the original and the Origins one just seems odd for anyone who grew up with the cartoon and comics. There's no great logic there, they're all (Scare Glow aside) figures I didn't have as a kid, and I like the head-canon of Cringer and Adam growing up and integrating into less comedic characters. Plus: giant green tiger. The new Battle Cat mould is huge, sculpted to stand much taller than the Big Jim one and closer to Classics in size.

Like a lot of commentators I'm not keen on the new He-Man and Skeletor head sculpts, and don't feel like picking up the redesigned Battle Armor deluxes to get more retro alternative ones. The extra paint applications versus the originals also feel a bit weird. I've seen people describe the original toys as Fisher Price style toys but bigger, and there's something in that... they were cheaply produced with as much tooling as possible reused until the line became a huge success, and that included scrimping on paint. So after looking at the various Super7 releases, which also had redesigned heads more aimed at cartoon fans, I just got an original He-Man. It's in quite good nick and doesn't even need the rubber band holding the legs on replacing yet.

I've picked up a few other originals for flavour, and unlike the eBay lot of He-Man and a Battle Cat body they've all been cheap (He-Man himself is hard to come by in decent condition) -- Roton, Battle Armour Skeletor, Sy-Klone, Jitsu, Hordak, Kobra Khan, Tung Lashor, the rock people Stonedar and Rokkon, and She-Ra. Getting hold of Jitsu now, which was partly because the armour might help with a King Randor custom if Origins doesn't give us one, it's not hard to see why even in the 80s Filmation was seemingly wary of being viewed as racist by advertising the toy. I've known fans comment they were glad to have any sort of representation (this was still an era in which Short Circuit featured a blacked-up lead character) but Jitsu really leans on older stereotypes.

That's enough, I think, and I'll probably pick up some more Origins, particularly of later year characters that are now hard to find originals of. I'm interested to see if they do Mosquitor with a working action feature, a normal colours Sorceress since there's a Temple of Darkness one in the Grayskull playset, Randor, and any Snakemen. Other characters that were in the Search for Keldor mini-comic such as Clamp Champ and Ninjor, both of whom have already been announced, might also get a look in. There's actually a collector's set of Keldor and Kronos (who became Trap-Jaw) due to be released at some point, but although Keldor is heavily implied to be Skeletor in the original fiction, and it was confirmed years later by the person who wrote it, that isn't stated and you don't see the earlier character, so I'm not really bothered; maybe I'll get a custom/recast head to go with a Skeletor or something. It's nice that there's subsequently been more done with MOTU in terms of storyline, which was always thin and a lot of the reason I cleared stuff out as a kid, but it's not really "my" version of MOTU.

Bits of plastic aside, there are a couple of new MOTU animated shows supposedly coming to Netflix -- Masters of the Universe: Revelations by Kevin Smith starring Mark Hamill and Sarah Michelle Gellar (supposedly a sequel to the original cartoon aimed at older fans) and a second show that may be a reboot. Since I find a lot of the original show almost as painful to re-watch as Thundercats, updates are welcome (MOTU could be incredibly patronising to kids, rather than just having bad writing like Thundercats -- with a lot of 80s shows the best thing about them was the opening and credits sequences). Though there will be bonus points if there's a Don't Put Mustard On The Cat public service announcement: http://flyingmoose.org/heman/mustard.htm