Welsh indie student guitar pop with equal helpings of humour and heartfelt crooning. Attracted some support from John Peel and other radio/media personalities, but the band found that being signed drained the fun out things. (Most of them went on to The Keys / sounding completely different.)

Most of the recordings prior to the album and its two singles sound a bit flat compared to their live act, but are hard to find these days anyway.

If anyone has copies of Murry demo recordings or any live bootlegs, I'd be very interested. And if anyone's interested, I've got a low quality 9-track radio (BBC?) recording and a slightly better 2001 show.

Update: Matt Sephton's Facebook group has some rarities, and the links still work! 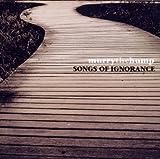 Fortunately, MTH managed to get some pro recordings released before they folded. This debut contains classics such as Green Green Grass, Booze and Cigarettes, New Deal and Kebab or Shag?