Project Zebra: Every new beginning from some other beginning's end ►

◄ Project Zebra: We are electric prophets, here to twist the world 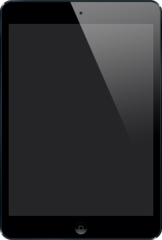 The original iPad Mini was a device I looked at getting when they first came out, and decided to stick with the Google-backed Nexus 7 models, and the Nexus 10, and wait for a decent Android device with a wider iPad ratio like the Nexus 9. It has a good battery life and passable non-retina screen, and like many devices it's utterly criminal that something still so functional in terms of hardware is almost ready for landfill in terms of support. Apple and other tablet/phone manufacturers deserve to be hauled over coals, and may still be in one respect if legislation against walled garden environments (eg this challenge but there've been many) happens. Anyway, for roughly twenty quid including a magnetic cover I thought I'd take a retrospective look at the 16GB model, which originally listed at £269. The lack of a microSD slot is a big limitation of Apple hardware, meaning you get at most about 12GB of storage.

Sideloading apps is possible with insane restrictions. Either pay $99 to Apple for a developer licence to sideload apps for up to a year, or use a free licence to sideload apps that expire after 7 days (this is the mechanism used by Sideloadly and AltStore). The alternative is "jailbreaking" a device to remove restrictions, which is similar to rooting Android devices insofar as both processes rely on vulnerabilities in the their respective OS, but it doesn't seem to have as much scope for protecting the device afterwards.

Not all versions of iOS have jailbreaks available. For iOS 9.3.5 and 9.3.6 devices there's one called Phoenix, but getting it installed currently requires either a developer account with Cydia or an online installer (using the profile workaround) that hasn't had an account revoked, neither of which are particularly practical or worthwhile in 2022. I've also seen some people recommend downgrading to 8 where a permanent jailbreak is possible. I'll consider that as a future project, probably going the iOS-OTA-Downgrader route, and will add an addendum here with how I get on, if I do. Note that the iPad Mini is a 32-bit device and requires jailbreaking as part of this process, presumably with sideloading as it's only needed once to do the downgrade.

You don't necessarily need to jailbreak the device to do stuff. Whilst most apps can't be installed from the App Store and for some ungodly counterproductive reason the store doesn't filter by iOS version, you can stick iTunes 12.6.3 in a virtual machine and associate apps with a particular Apple ID account, then in some cases access last supported versions on the tablet. The trouble is, browser apps like Firefox don't have extensions due to being limited to Safari as a rendering engine. Out of several dozen separate ad blocking apps, none would install this way, and Firefox Focus is only for newer operating system versions. I did find an older version of Maxthon offering some kind of AdBlock Plus plugin, but it doesn't block YouTube ads. iPlayer works in Safari. Prime Video works on an older version. Sites like BBC Food work for recipes. You can still find games such as versions of Tetris etc that work fine on iOS versions that are actually far older than 9.

I saw an interesting alternative to adblocking suggested for YouTube here with a pointer to the original host of invidious.io and looking at yewtu.be it seems to search YouTube listings and translate video pages to googlevideo.com stream locations or embed them. That'll do nicely and probably avoids the need to jailbreak in my usage case. And since you'll be using websites rather than apps, you might like this tip for a bookmarklet to make sure they have a nice hi-res PNG icon:

There's a built in clock app with timer, so this works as a kitchen device that also serves as a cookery book and can play a bit of TV or radio. Since it has pretty good standby battery life (still at 45% after over four weeks) it could also probably be used well for audio books, light reading, cue cards, etc. VLC and software to browse Samba shares such as FE File Explorer is still available. However, apps such as VLC can't browse local files, and the FE File Explorer video player apparently can't do background audio playback. I think the theory is you're supposed to download to VLC from a cloud service or load files to it via iTunes on a desktop PC. Overall this is a pretty horrible example of a sandboxed environment.

So I'm very impressed at how capable the hardware is ten years later, despite it getting slated at the time for its spec versus price, but can't fathom its audience accepting restrictions that even casual users are likely to encounter. From the volume of jailbreak information out there it seems that a lot of owners either didn't have much choice of what tablet they got (being kids, in receipt of hand me downs, found in thrift stores and assumed wouldn't be crap because it's Apple, etc) or otherwise rapidly ran into a device being too constrained.