"Ricardo" may be familiar from other projects, including the Cuban Boys (best known for the song commonly referred as "The Hampster Dance") and the UK's 2006 Eurovision entry, Teenage Life. The KLF are an obvious influence.

Something more recent worth checking out is his The Golden Age of Video mashup of film quotes. 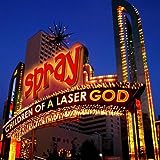 Children of a Laser God

The most straight-faced moment on this CD is probably its (nifty) cover of the theme to 80s cartoon The Raccoons. The rest is deliciously subversive, with tracks such as You Eat One Lousy Foot And You're A Cannibal. Listen to the whole thing on Bandcamp.

More reviews when I get time.