Project Zebra: [Pears] are too squishy and they always make your chin wet ►

◄ Of course, the cats on your world can't talk. Getting back into MOTU a bit. 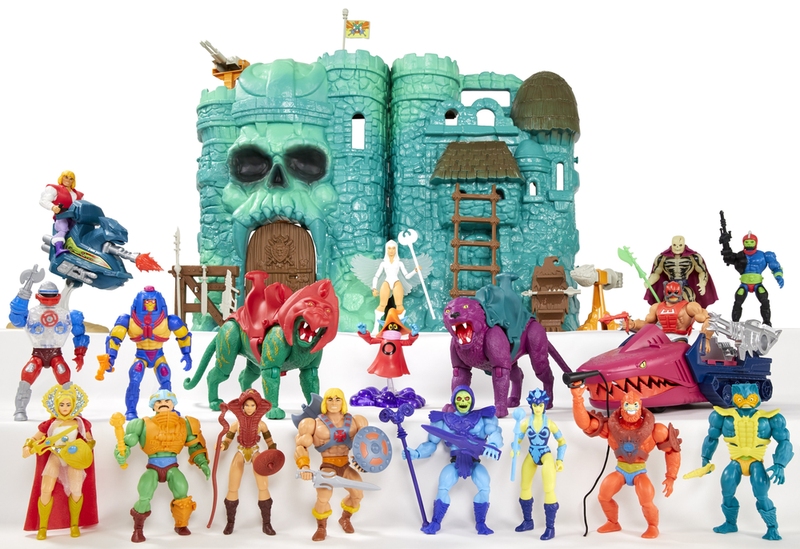 In a nutshell, "Masters of the Universe" was a result of toy advertising deregulation by the Reagan administration in the US in the early 80s, allowing cartoons that were essentially adverts to be aired. It's a basic good vs evil swords/sorcery/tech thing, and He-Man and Skeletor are still household names so I'll skip giving much background. There was a lot of tie-in merchandise, comics, a Princess of Power sister toyline, typically unsuccessful but cult favourite live-action movie and an abortive Powers of Grayskull line that got replaced with a more futuristic New Adventures of He-Man line.

The company behind MOTU (Mattel) revived it in 2002 for a new audience, which didn't last long and gave way to adult collector lines, initially from Mattel (Classics) and then from Super7 (various). Now Mattel's having another crack at it with an Origins line in a retro/vintage style but at retail and priced accordingly. The big questions are whether they've missed the window of parents who grew up with MOTU having kids of their own young enough to enjoy it, and how much of a market there is for action figures these days at all even taking into account that adults will be interested too.

After a year of being largely exclusive to Wal-Mart in the US, and an apparently popular side line of WWEternia figures mashing up classic wrestlers (Mr T! Hulk Hogan!) with MOTU that's meant that a lot of MOTU accessories already have tooled moulds, they're being offered in greater quantities to other retailers. There are two price points: basic figures are articulated but don't get an action gimmick that would reguire additional engineering (and none of them so far appear to have the spring loaded waists the originals were known for) and the slightly higher-priced deluxe figures get an action feature and/or extra parts like different heads, etc.

Now, whilst MOTU was everywhere as a kid and it seemed like there were a vast number of them, looking at the He-Man.org collection checklists there were a lot of gift sets but not as many characters that originally got toys as I remember, even including cats, horses, birds and a giant preying mantis. Arbitrarily including late editions like the two spinning tops and two giants but not the bionic dinosaurs that were packaged as Powers of Grayskull, it's about eighty. Knock off ten for variants of He-Man, Skeletor and Hordak, five for the animals apart from the cats, etc. although of course this doesn't include the POP and NA lines.

So the Origins listings for this year with nearly thirty figures could be said to represent two or three years of 80s product, and if it sells well enough (again bearing in mind lots of parts and accessories have already been sculpted for the wrestling line) then the Origins line might cover the rest in another couple of years, probably omitting things like live-action movie characters. With the moulds produced, and parts heavily reused anyway like with the 80s figures, it could become evergreen similar to Hasbro's reissuing of original Transformers.

Thumbnails below mostly from He-Man.org which is really worth checking out for full size images including packaging, box art, etc. This was just a quick exercise in counting characters, with it turning out the only one I'd completely forgotten was the Night Stalker repaint of Stridor that was usually paired with Jitsu.

Definitely interested in a few. As a kid the monsters (mostly Snake Men and Evil Horde) were favourites.